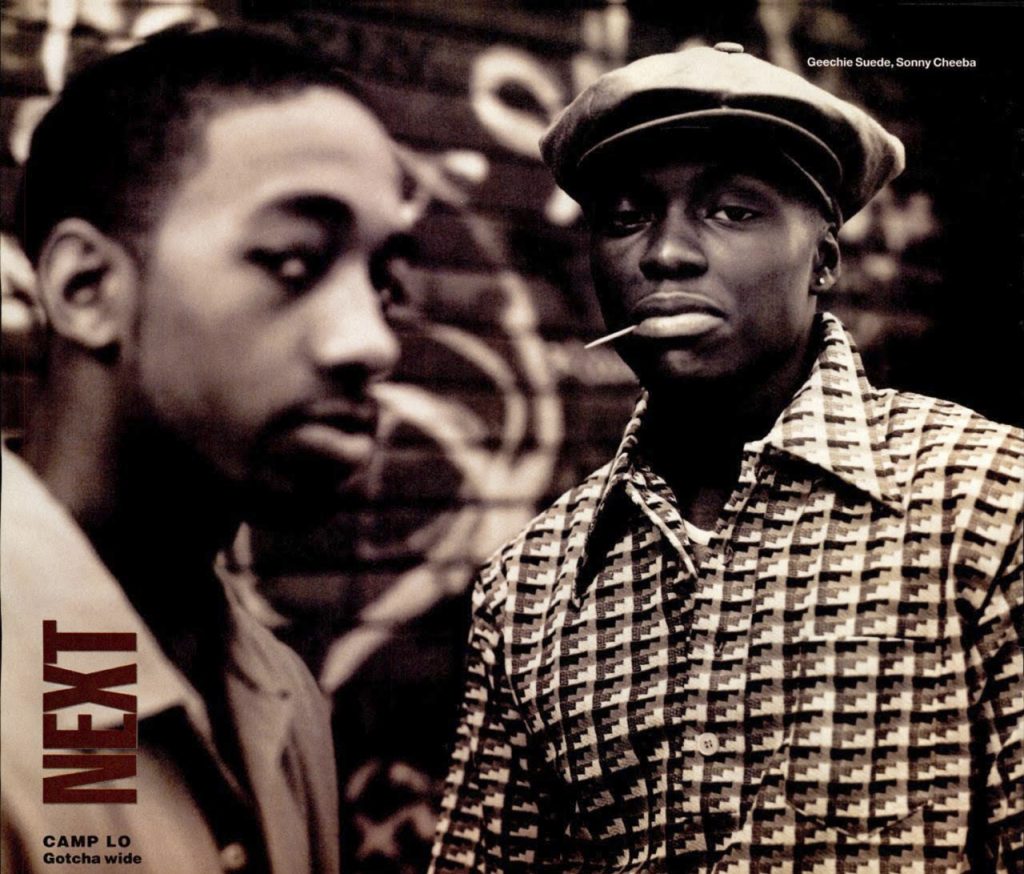 “What I love most about ’70s flicks is the cool way they talked and dressed,” says Camp Lo’s Geechi Suede (Salahadeen Wallace), barely watching a videotape of the 1970 action comedy Cotton Comes to Harlem. “Not in this flick, though.” Geechi waves his hand at the screen; he and his partner Sonny Cheeba (Saladine Wilds) are a tad disappointed in the Blockbuster blaxploitation selection this writer has brought to Geechi’s modest East Bronx apartment. Cotton’s not quite as gritty as 1973’s gangster-bent Hell Up In Harlem, or the 1975 coming-of-age classic Cooley High, which are the duo’s favorites. But whether funny or mackadocious, these cinematic moments (which came out when these cats were in  Pampers) mark Camp Lo’s bond. Geechi, 21, and Sonny, 22, met two years ago after being introduced by a mutual friend, and discovered that they shared not only a first name but also a love for the decade that embodied flamboyance and superbad optimism. “Sonny introduced me to The Mack,” Geechi says. He in turn took Sonny – who was on his way to electrician school and had never rhymed a day in his life – as his partner. “What gave me the idea to do it was Sonny’s ability to critique raps,” he says. “Thoroughly.”” Check out the visuals to “Coolie High,” Eight months later, after completing and shopping their demo, Camp Lo landed a recording deal with Profile, set to pull off their heist of the rap game. Their first single, “Coolie High,” which appeared on the soundtrack to The Great White Hype, was a quintessential old-school-meets-in-school hit that blended the duo’s retro rhyme delivery with their cut ‘n’ paste recollection of the ’70s, blaxploitation, and The Godfather. Their long-playing debut, A Piece Of The Action, is a full-blown taste of Original Flavor’s Ski, the album offers a lineup of intoxicating songs like “Sparkle,” “Nicky Barnes,” and “Black Connection” (an adaptation of Bruce Lee’s Chinese Connection). “I thought it was fly to take on that concept because not too many MCs were coming from a movie angle,” says Geechi, reducing the Cristal/Versace onslaught to a fun fantasy. This way, if listeners don’t want the party to end, all they have to do is rewind.” – Vibe, November 1996.